Preview of Path of Exile 2 from ExileCon 2019 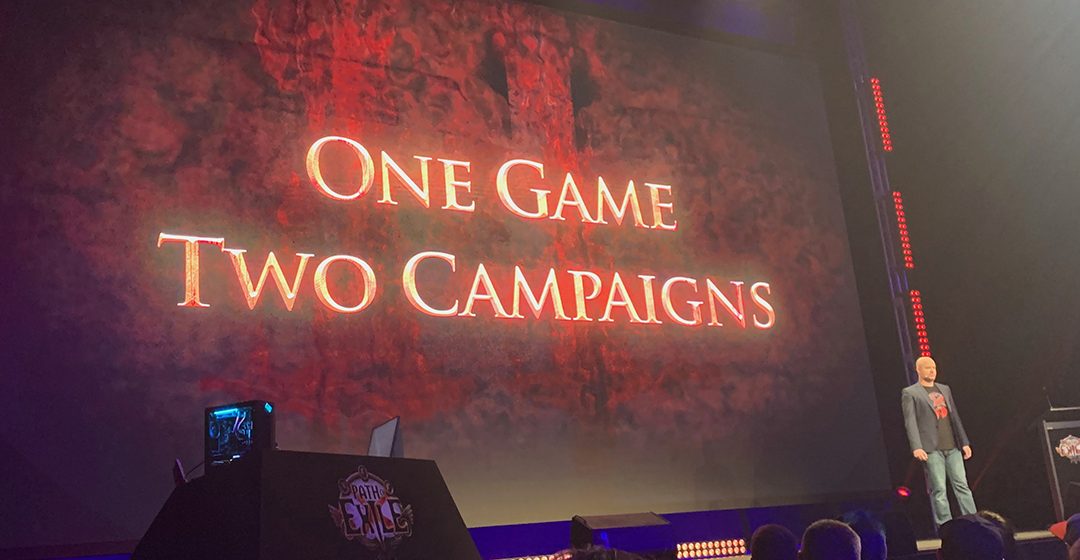 This weekend marks the first ever ExileCon – a convention dedicated solely to the action RPG Path of Exile created by Grinding Gear Games (GGG). The game’s most hardcore fans gathered from around the world to attend the event in Auckland, New Zealand.

Day one of the event started with keynote presentation from the company’s co-founder and Managing Director, Chris Wilson. His presentation included announcements of a new challenge league called Metamorph and an end-game focused expansion called The Conquerers of the Atlas- both set to launch in mid December, 2019.

The biggest announcement was in the reveal of their highly anticipated 4.0.0 expansion, which turned out to be a complete second edition of the game called Path of Exile 2. Dubbed “one game with two campaigns”, the expanded gameplay will include seven new acts of content. It will also feature a brand new game engine, widely expanded ascendancy classes, and many quality of life improvements to the overall gameplay.

Last, and perhaps least, GGG also announced a mobile version of Path of Exile. After Blizzard’s botched announcement of a mobile Diablo, the POE fans in Auckland thought GGG’s announcement might be a joke. But it wasn’t. Despite showing a clip of their “mobile fall guy”, Chris Wilson assured the audience that their mobile version of POE is real, with a demo version already constructed and available for play the convention.

I had the opportunity to play both versions of the game at ExileCon and, though we weren’t allowed to record any of the gameplay footage, I wanted to share my initial reactions.

The first thing I noticed after logging in was how much better the new game engine felt. The graphics have been greatly improved, as well as the general gameplay. Everything just felt much more crisp and smooth. Frame rates were consistent, colors more robust, and the environment much more interactive. For example, when you fire a volley of arrows you can see each one individually stick in the environment (or bounce away if it’s deflected). The sound effects were also noticeably more dynamic, which adds a lot to the general atmosphere of the game.

I only had 45 minutes to play through the beginning of the first act, but there was a palpable difference in monster mechanics. There was much more diversity across the enemies you face, which by nature makes the game more challenging- in a good way. The early acts of the original often felt too mindless, just a means to an end to get to the more interesting content. Now most of the creatures you encounter have some sort of spell or special ability that forces you to be more careful. It was satisfying to face a significant challenge that early on in the campaign.

Aside from all the new content in Path of Exile 2, the most noticeable change out of the gate was the new skill system. The older system of using items to hold all of your skill and support gems is difficult to learn and presents tedious mechanics during leveling. It’s not uncommon to find a new item that should be an upgrade, but doesn’t have exact same number of links and colors to hold your gems. And even if you can swap all your gems over, it’s a tedious process.

Now there is a dedicated tab for skill and support gems, making them easier to track and manage. Items still have colored sockets, but the number of links for support gems is now attached directly to the skill gems themselves. It’s a great change that makes the leveling experience much more consistent. This change also allows players to opportunity to have multiple 6-link skill gems, opening up the potential for builds with multiple primary skills.

This change is just incredible. Managing skill gems is substantially easier. The dedicated skill tab also clearly shows how support gems affect the overall damage of each skill. It feels much more dynamic in nature, and has the upside of also making skill gems more valuable. Finding a skill gem with 5 additional links early on could be worth a pretty penny.

Overall I couldn’t be more excited for Path of Exile 2. The changes presented by GGG clearly reflect a game developer that has spent years listening to their community and refining their game. They’ve made big strides to make POE feel like a proper AAA title. It’s a game renowned for it’s depth and complexities, incredible for hardcore players but sometimes intimidating to more casual players. Path of Exile 2 appears to be bridging that gap by making the game easier to understand for newcomers, without sacrificing late game complexity. A conundrum modern MOBA games have yet to adequately address.

Although Path of Exile 2 looks more than promising, I remain skeptical of the mobile version. I strongly believe in the future of mobile gaming, but there’s still a long way to go until it’s up to par with traditional PC and console games.

POE Mobile is no exception to this, and though it an impressive port to a limited platform, it still feels incomplete. Chris Wilson was quick to mention in his keynote speech that they plan to continue building out the mobile version based on the feedback of their audience. It seems their vision for this port to make it into whatever will resonate most with their most loyal fans.

It an admirable approach, but in it’s current state I’m not entirely sure who their target audience is. The general gameplay is satisfying for a few minutes but quickly becomes just mindless slaying of unintelligent monsters. The general gameplay wasn’t particularly challenging, though the input controls certainly made it more difficult. The skill-shots you’re familiar with from Path of Exile on PC have been altered to accommodate the lack of mouse cursor for aiming. GGG did a good job capturing the spirit of these skills, though they don’t feel nearly as satisfying.

The biggest hurdle GGG will need to overcome is the inventory management. Without a cursor to quickly mouse over items, scrolling through various inventory screens felt extremely slow and cumbersome. I can’t think of an obvious solution to this, but given that so much of POE is based around items and crafting, this will most certainly be a priority as it gets closer to launch.

It’s difficult to compare a demonstration version of a game with the final product, but the version I played at ExileCon 2019 still needs a lot of polish. The client was riddled with game breaking bugs, ranging from not being able to interact with key NPCs to one of my spells repeatedly auto-casting for no obvious reason. On top of that, the iPhone 11 Pro Max could barely handle the game and was extremely hot after only 20 minutes of gaming. I also felt a degree of motion sickness after my short session, though it’s hard to pinpoint the exact cause.

Comparing a mobile version of POE to it’s computer counterpart is admittedly comparing apples and oranges, but overall I was disappointed with the mobile adaption. Given GGG’s reputation for listening to community feedback, I remain optimistic for it’s launch, but ultimately I would have much preferred an announcement of POE on the Nintendo Switch.

GGG made up for it though in my book with their announcement of Mac OS support for Path of Exile 2!

Check out the official announcements on the POE Youtube